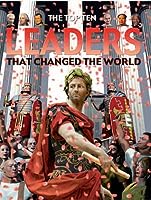 The Top Ten Leaders That Changed the World

Just in Time: Notes from My Life